Some additional late entries that I remembered.

Some Frolic do’s and don’ts,

Don’t buy an endurance tank and run out of fuel on the first day.
Do leave in plenty of time to catch the ferry/tunnel.
Don’t drink too much on the ferry and fail a breathalyser test.
Do look the correct way when joining a main road.
Do carry coloured electrical insulating tape if your car has stripes.
Don’t say to your wife that you’re having a brilliant holiday when she wants to go home on the first day.
Do buy a Sanef-tag, as fumbling for change while the others disappear into the distance is not fun.
Do take part in the Télépéage Grand Prix.
Do drop a gear and floor it at every tunnel.
Don’t pax with a good driver and then think you can do it too, before ending up in the kitty litter.
Don’t take tips from the French Stig.
Don’t overfill your car with oil.
Do change your brake pads at least twice.
Do look in your rear view mirror for someone coming up for a fly-by at 100+ tuts.
Do leave the party if someone arrives wearing a gimp mask.
Don’t jump out of the pax seat at 50+ tuts if the car is on fire.
Don’t get caught speeding.
Do have the days destination entered in your Sat-Nav.
Don’t knock down any cockerels.
Do be prepared for your car to be wearing some stickers in the morning.
Don’t reverse into a bollard.
Don’t take the wrong turning if leading.
Don’t sit at the back of the convoy as you will get stressed getting dropped and trying to catch up each time.
Do get drunk and participate in the party games.
Do be prepared for not having enough sleep each night.
Don’t come off the track on the sighting laps.
Do wish that you’re driving a 211/311 when it’s sunny and you’re on track.
Don’t laugh if you see a 211/311 when on the motorway in the rain.
Do post plenty of pictures and videos for those that cannot make it.
Don’t say that you have traction control on.
Do say that you have all the safety aids turned off.
Do say that you are a racing driver if anyone asks.
Don’t wash your car as you can pretend it’s a race car since it’s covered in rubber.
Don’t get scalped by a S1 if driving a V6.
Do ask if anyone has taken a Jack.
Don’t get drunk, have a hangover and instantly regret it at the track briefing.
Do bring some duct tape, but hope that you will never need it.
Do be organised and be ready to drive to the next location.
Do be the last group to leave the restaurant or bar each night.
Don’t leave your wallet, phone or car key behind at any time.
Don’t drink warm drinks, especially from a Coca-Cola or Irn-Bru bottle in the passenger footwell of someone’s car.
Don’t get a puncture.
Don’t fly your wife over with the promise of a champagne tour and tasting.
Do propose so you can go on another Frolic in the future disguised as a romantic gesture. (This could be a problem if you’re already married though.)
Don’t calculate the mpg.
Don’t count up overall costs.
Do remember the Top Gear rules if someone else breaks down.
Do take the Alps route home.
Do enjoy yourself.
Do arrange for another holiday immediately after the trip.
Don’t let your wife drive on track, especially on the first day.
Don’t worry too much about tyre pressures on track, just drive.
Don’t mention HGF to anyone driving a S1.
Do say SHED a lot.
Don’t take a trailer, as it’s a driving holiday adventure.
Do wish you took a trailer after your car breaks down.
Don’t wear your wristband to the bar, it was only a track day.
Do buy a round of drinks.
Don’t buy another round of drinks if the other guests start arriving for breakfast.
Do pretend that you can’t lead to reduce your chances of getting caught speeding.
Don’t say to your wife that you know what you’re doing when it gets spirited on the road twisties.
Do make a playlist of your favourite tunes.
Do wish you had an Evora for the motorway miles, an Elise for the road twisties and a 211/311 for the track.
Don’t drive on the left.
Do or don’t you order a ‘Crit'Air’ sticker.
Do be glad of Brexit if activating a speed camera.
Do be prepared to be driven to a cash point to pay an on the spot fine.
Do remember that the police carry guns.
Do learn the French word for diesel.
Do say how little it costs to fill up your S1.
Don’t stick beam deflectors on your headlights, as nobody has ever been blinded by a candle.
Do or do not, there is no try ‘Jedi Master’.
Do left foot braking and dab of oppo you must.
Don’t left foot brake like depressing the clutch.
Do promise to learn how to heel and toe.
Do be competitive on track.
Don’t be a rolling road block on track.
Don’t think for one second that you’re fast, you’re not.
Do smile when your mate in front gets a blue flag.
Don’t get black flagged.
Do offer a shot of your car if your mate has a mechanical.
Don’t bin your mates car.
Do wish that you could speak French if you have a breakdown and require transport home.
Do participate in the banter.
Do be surprised that each circuit is longer than 1.3miles.
Do wish that Scotland had more than one track.
Do wish that it was warmer at Knockhill.
Don’t say you wish it was raining because you’re too hot.
Do remember to insert a memory card in your GoPro.
Don’t store your dirty underwear inside your helmet.
Do laugh when you hear that his latest car is a ‘keeper’.
Don’t drive home in one go.
Do share your stories about The Legend called ‘Tut’.

Ps, the names have been left out to save embarrassment and there are plenty more that could be added.
Top

Thanks Steve that made me chuckle

Be interesting to hear how much of them are relevant for your first Frolic.

Let’s hope that the gimp mask is not one of them.

I will see if I can find the picture.

Was it a 2litre bottle of coke that was included in your one?

Hey, you said the names had been left out to save embarrassment

I don’t drink ‘coke’ any longer.

I didn’t say which one though.

Who would have thought that a gimp mask and bottle of coke go together?

Only joking, it’s not that one.


It’s more likely to see ‘your one’ happening on two wheels now.

Do get your gimp to order twenty pints. 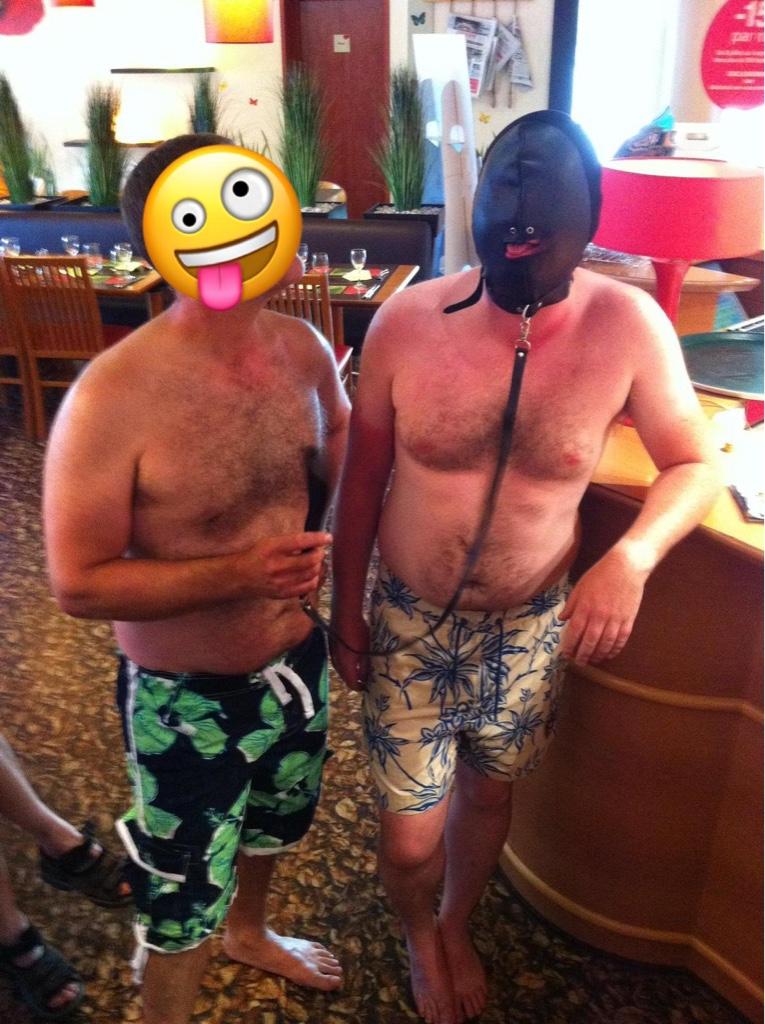 Still some spaces on Frolic.

All characters appearing in this post are fictitious. Any resemblance to real persons, living or dead, is purely coincidental.
Any references to laptimes, speed or driving on the public highway are purely for dramatic effect.
Top

. Paul seems to have forgotten/forgiven you Ali!

He did think I was out to finish the job when he went for an early lunchtime cycle at Zandvoort and we allegedly missed the red flag and came zooming past him.

In case Paul’s lawyers are still listening he fell over and broke his leg. I may have been chasing him at the time (for stealing then throwing my passport in the pool) but that would be purely incidental...
All characters appearing in this post are fictitious. Any resemblance to real persons, living or dead, is purely coincidental.
Any references to laptimes, speed or driving on the public highway are purely for dramatic effect.
Top

I am sure the gimp mask ordering happened at the same time , I remember the passport being thrown into the pool along with Scottys LOT racing book ...as I was in the pool at the time Ali jumped out and set after him ....Paul smashed his leg.....and me and Benny decided it was a good time to go and get a round in .
S1 S160

Stu160 wrote: ↑
Sun May 08, 2022 7:57 pm
I am sure the gimp mask ordering happened at the same time , I remember the passport being thrown into the pool along with Scottys LOT racing book ...as I was in the pool at the time Ali jumped out and set after him ....Paul smashed his leg.....and me and Benny decided it was a good time to go and get a round in .

Stu160 wrote: ↑
Sun May 08, 2022 7:57 pm
I am sure the gimp mask ordering happened at the same time , I remember the passport being thrown into the pool along with Scottys LOT racing book ...as I was in the pool at the time Ali jumped out and set after him ....Paul smashed his leg.....and me and Benny decided it was a good time to go and get a round in .

Nah gimp mask was an Amsterdam purchase at my impromptu Stag do - I think.

Also remember having to spend ten minutes in my pigeon French trying to persuade them that we did genuinely need an ambulance for Paul, thanks to Alis "tap tackle", and they finally relented and phoned it in.

And Frolic hadnt even started yet.....

Steve reminded me I'd booked winter frolic but hadn't put my name on the list, not added to FF22 either, I have definitely booked and paid, honestly your honour!